THE ART OF RICHARD POWERS 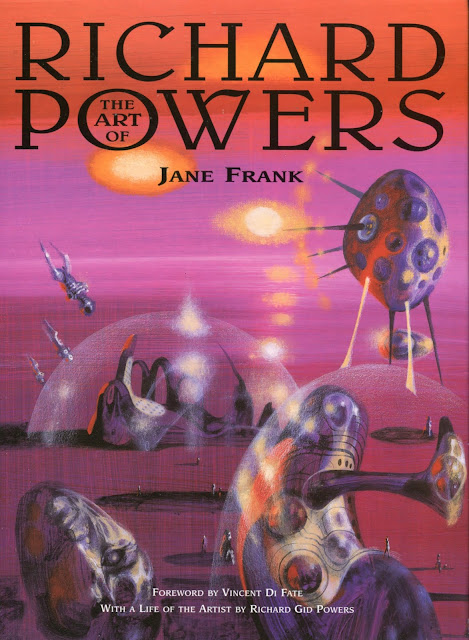 "Starting with his first appearance on ballantine's paperbacks in the 1950s, Richard Powers's career spanned over four decades in which he produced jacket illustrations for over 1,200 sf novels. Now widely regarded as the single most influential artist in the history of paperback illustrative art, he is also considered a figure of towering stature in american twentieth-century fine art.

Illustrated throughout with over 120 of the artist's powerfully evocative and dreamlike paintings, this dramatic and colourful book reveals the full diversity of powers's distinctive art.

Includes an inside look at his life by his son Richard Gid Powers, interviews with the innovative artist himself and a forward by Vincent Di Fate."

"More than any individual author, Richard Powers showed the public that science fiction could be written by intelligent adults for intelligent adults. His superior aesthetics, which still overshadow most rivals, were actually what started me reading modern sf - with Alfred Bester's The Stars My Destination, the cover for which perfectly captured the mood of that great American novel. I bought the book in Paris in 1957 because the cover looked cool. It didn't insult either my eye or my intelligence. So if it hadn't have been for powers, my romance with science fiction would have ended in my teens. I have huge admiration for him and am delighted that his talent is again on splendid display!"

I've owned this book for years now but somehow neglected it throughout the existence of this blog until now. Of all the books with SF art as subject matter, The Art Of Richard Powers is one of the best and easiest to obtain with copies going for £3 - £10 used and new on both eBay and Amazon. Published in 2001 by Paper Tiger the book is crammed with full-colour illustrations, interviews and biographical essays - one of my favourite aspects of the book is a complete check-list of novels with publisher and publication data for every book that Powers worked on.
Posted by Unknown at 13:32 No comments:


"Earthman Gary Towler is treated like a pariah; for his task as chief interpreter for the corrupt and tyrannical Nuls makes other humans avoid him as a traitor. Nor is he trusted by the three-armed mammoth rulers themselves. The leaders realize that Gary knows too much. When the Humans leading the underground rebellion demand Gary's aid or his life, he is caught between two untrustful forces. And his only way out is to make himself into a one-man third force against two worlds' plotters."


"Defying time, Jack Breton crosses into a parallel world to regain Kate - the wife who, nine years earlier, was found raped and strangled in a lonely park. But, in the alternate time-stream Kate is married to his double, John. And for one husband to remain either Jack or John must die..."

After a devastating atomic holocaust, mankind had now turned to the machine to solve his problems. Which led to the androids - descended from the robot, they were hardly distinguishable from real humans. By the year 2113 they ran society - leaving man to a life of leisure.

It was into this world that John Markham emerged after spending 146 years of suspended animation in an underground deep-freeze unit. But his new lease on life was likely to be a short one. A man with his 'outdated' ideas could be very dangerous - a fact the androids realized only too well..."


"EARTH'S ELITE - OR ITS OUTCASTS?

For a selected, genetically-fitted few among the teeming millions of the twenty-first century, to become a messenger for the hulm institute is to escape the prison that is life, that is earth.

A MESSENGER IS NOBLE!

A MESSENGER IS ONE OF THE CHOSEN.

A MESSENGER IS A FORERUNNER OF A TIME IN WHICH FEAR AND DISEASE WILL DISAPPEAR FOR EVER.

And inside a messenger's head is murder, impotence and despair."


"Thirteen fantastic new stories on the classic themes of science fiction by: Isaac Asimov/Poul Anderson/Robert Silverberg/Harlan Ellison/Frederik Pohl/Brian Aldiss/Harry Harrison/Philip K. Dick and others. Between them the contributors have won all the awards bestowed by science fiction: seventeen Hugos, ten Nebulas and the John W. Campbell memorial award. In this very special original collection, each writer is at the top of his form, each attempting to create the ultimate on a given theme."


We Purchased People by Frederik Pohl
The Voortrekkers by Poul Anderson
Great Escape Tours, Inc. by Kit Reed
Diagrams For Three Enigmatic Stories by Brian W. Aldiss
Thou Art Mindful Of Him! by Isaac Asimov
We Three by Dean R. Koontz
An Old Fashioned Girl by Joanna Russ
Catman by Harlan Ellison
Space Rats Of The CCC by Harry Harrison
Trips by Robert Silverberg
The Wonderful All-Purpose Transmogrifier by Barry N. Malzberg
Her Smoke Rose Up Forever by James Tiptree, Jr.
A Little Something For Us Tempunauts by Philip K. Dick.
Posted by Unknown at 11:06 No comments:

"He had a moment of shattering, blinding terror. One minute he'd been driving along the familiar road to his city office, next he was hurtled centuries into the future - but why? The tribesmen of the wolf had chosen him for a grimly dangerous task. But how could he escape it, and return to his own time?"

"World War III is raging - or so the millions of people crammed in their underground tanks believe. For fifteen years, subterranean humanity has been fed on daily broadcasts of the never-ending nuclear destruction, sustained by a belief in the all-powerful protector. But up on Earth's surface, a different kind of reality reigns. East and west are at peace. Across the planet, an élite corps of hoaxers live in vast private demesnes - repayment for their services in preserving the great lie. Until one day, a tanker emerges and discovers the path to the most sinister penultimate truth of them all..."